It took Donald Trump 10 weeks to learn what most fans have learned in a mere 10 minutes: Lou Ferrigno is an unbearable asshole. 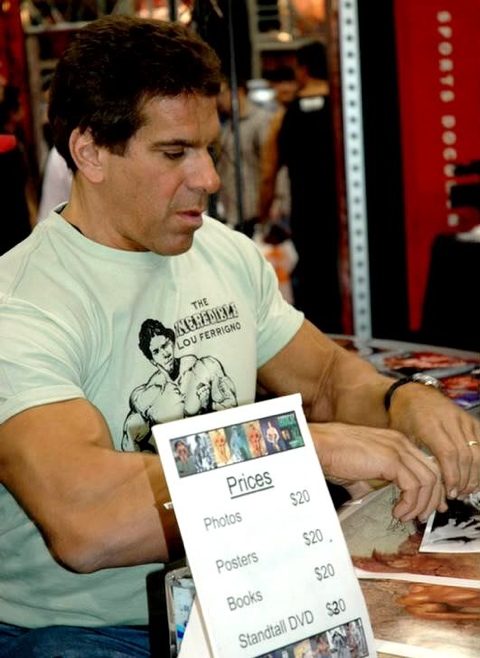 After riding other people’s coattails for nine weeks on NBC’s The Apprentice, The Donald finally did something right by shitcanning the useless slab of steroid-inflated muscles known as Lou Ferrigno.

Ferrigno, who has never met a $20 bill he didn’t like, is widely disregarded amongst bodybuilding fans for his distasteful penchant for charging fans $20 to sign an autograph or have his photograph taken with them at bodybuilding expos. While this practice may be acceptable at Comic-Con and other conventions where has-been TV heroes go to beg for scraps, it is extremely frowned upon at bodybuilding expos where past and present Mr. Olympia champions (Ferrigno never actually won bodybuilding’s most coveted title) freely sign autographs and pose for photos with fans.

Ferrigno, who hasn’t really done much of anything since ‘The Incredible Hulk’ vacated the airwaves 30 years ago, somehow continues to draw interest from fans despite being little more than a larger version of a six-year old working the lemonade stand every weekend.

Donald Trump threw Lou a bone by re-inserting Lou into the public limelight for a few weeks. Hopefully, his Hulk-sized ego will shrink back to Bill Bixby-like proportions once a week or so passes.

No one ever said it was easy being a washed-up bodybuilder, has-been actor, and overpriced circus performer, but then again, that’s the price of being permanently entrenched in Hollywood history as a D-list footnote.

It’s too bad so many people (including myself) were fans of the original Hulk series. Otherwise, Big Louie might be forced to actually get a job instead of separating starstruck, middle-aged dads from $20 that was earmarked for taking their boys to lunch.

And how cool would it be to walk into a McDonald’s and look a giant douchebag in the eye and say, ‘Supersize it, Hulk!’

Erykah(Erica) Blockman Emerald Queen Of Muscle By R. Knight It may be premature to talk about the future of Women’s Physique.  Since the division is barely three...
Read more
Interviews

Whenever MuscleWeek Senior Editor Shane Ray comes to visit me in New York, I always try to keep him locked in my basement. Why?...
Read more
News

The cliché answer from personal trainers and nutritionists on avoiding the pit falls of eating lousy foods is always the same. “You have to...
Read more
News

As most bodybuilding fans know, Victor Martinez is currently being detained by the United States Department of Homeland Security. The major question in everyone’s...
Read more

Erykah(Erica) Blockman Emerald Queen Of Muscle By R. Knight It may be premature to talk about the future of Women’s Physique.  Since the division is barely three...
Read more
News

Perspective: Men’s Physique – What’s The Deal? By R. Knight We are two years in, but for all purposes. The Men’s and Women’s Physique divisions have...
Read more

Your Only Source of Credible Bodybuilding News and Information coming to you straight from the Mecca in Venice, CA!

MuscleWeek is proud to announce the signing of Todd Jewell with Muscular Development. Todd was an early ally and supporter of both Big Nation Radio and MuscleWeek,...
Read more
News

Lou Ferrigno Fired from ‘Celebrity Apprentice’ It took Donald Trump 10 weeks to learn what most fans have learned in a mere 10 minutes: Lou...
Read more
News